One of the first instructions in almost any writing class is “show, don’t tell.”  Use concrete images and descriptions to communicate a point.  That’s much more effective that simply saying a thing is so.  For example, describing hand gestures and facial expressions engages interest much better than just saying someone is excited. 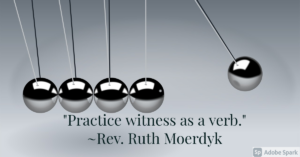 This principle is apparent in today’s scripture.  On the first night after reports of Jesus’ resurrection few specifics are clear.  Even after the disciples from the Emmaus road rejoin the group in Jerusalem there is mostly telling: speculation, rumor, disbelief.  Then Jesus appears and events get concrete very quickly.  Touch me.  Give me something to eat, says Jesus.  He appears in a mysterious, yet flesh-and-blood body.  The writer of Luke portrays a risen Jesus that shows—that makes physicality visible and real.  Talking and telling fall short of truly manifesting new life.  It’s important to show that resurrection is real.  Regardless of what we may think about the factuality of resurrection the message of all the gospels is clear.  Bodies matter.  The physical world matters.  Resurrection affirms this fundamental conviction and resists separating the spiritual from the physical.

And an embodied, resurrected Jesus shows that death dealing powers are overcome.  Brutality, violence, hate, and all their manifestations meet defeat by the surging, wild, unstoppable power of the Holy One, Source and Sustenance of all life.  The eternally renewed and transformed life Jesus bears witness to is not only for some heaven—it is for here and now.

Or, as the British theologian NT Wright says, “Jesus’ resurrection is the beginning of God’s project not to snatch people away from earth with the life of heaven but to colonize earth with the life of heaven.”  Resurrection, according to Wright (among many others) shows the presence of new and transformed life in this world.  Resurrection makes it real.  And we are witnesses, Jesus says.  It’s not a future phenomenon, it’s a here and now way of acting and being.  We make new life, life as resurrection people, real to others…now.  Witness is not an aspirational goal, it’s a present reality.

And so, we must look for resurrection among us in concrete ways, not simply as a nice idea to talk about.  We must make it real for ourselves, and for others.  And we must acknowledge that, like the original disciples we may only get fleeting glimpses of resurrection…so we must treasure them.  Let them convict us. Remember them.  Tell others.  Practice witness as a verb.  Keep an eye out and know that a sign of resurrection may seem alarming, bewildering, as it was for the first disciples.  And we must encourage one another in community to know and see and confirm new life.

But in order to see it, we must be looking for it; we must acknowledge the possibility that resurrecting and resurrected life appears in the world. After all, what we see depends upon what we look for.  We see what we want to see.  And resurrection appears in ways both small and large:

A lawn with dandelions growing.  Or many lawns with native plants growing and budding.

Dozens of vacant lots in Detroit converted to community gardening

Such a list could go on quite a bit, once we start actually looking for evidence of resurrection’s presence and power.  We can stop just speculating about new life, and begin seeing it.  Begin making it concrete in our lives.  Even brief glimpses can matter profoundly if we let them.  Suffering and injustice thrive in the world; we aren’t asked to ignore that.  But we are called to be witnesses to resurrection…together.  To see and touch signs of new life…to nurture seeds that can grow, to shift our line of vision to

Forgiveness of ourselves and others

Community and a passion for the common good

Becoming a witness is not an overnight project.  It’s not necessarily easy.  It asks us to move from what we know toward what we do not, trusting the life of the one we follow.  Trusting the One who created irrepressible impulses toward life in all.  Trusting the one who reveals new life.  A life we witness to.  A life made real for us, so we may make it real for others.